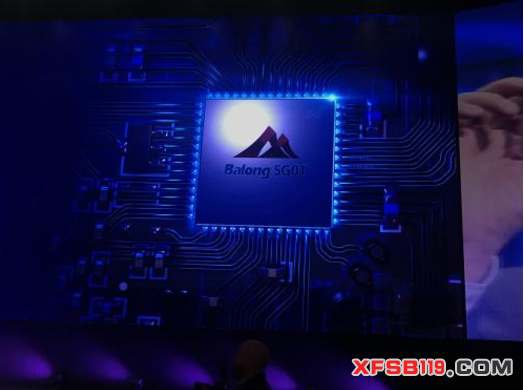 On the eve of the 2018 World Mobile Communications Conference (MWC), Huawei officially released Huawei's first 5G commercial chip (Balong5G01) that complies with the 3GPP standard (the world's leading communication standard), and the first 3GPP based on the chip. Standard 5G commercial terminal - Huawei 5GCPE (ConsumerPremiseEquipment).
"Huawei's first 3GPP standard 5G commercial chip and terminal release is a key breakthrough in the global 5G industry, which means that the 5G era has arrived." Huawei's consumer business CEO Yu Chengdong said: 5G is a brand new, disruptive starting point. It will bring human society into a new era of Internet of Everything, which will bring great convenience to people's life and production methods, and the way users communicate and share will also revolutionize. 5G will not only meet the needs of the communications industry, but will also enhance the global smart environment, bringing new feelings to industrial manufacturing and the lives of people including medical, home and travel.
Huawei's Balong5G01 is the world's first commercial 3G chip based on 3GPP standards. The Balong5G01 supports the world's mainstream 5G frequency bands, including Sub6GHz (low frequency) and mmWave (high frequency), which can theoretically achieve data download rates of up to 2.3 Gbps. The chip supports two networking modes: 5G non-independent networking and 5G independent networking.
5G networks and terminals are the two basic conditions for 5G commercial use. For the terminal, the chip is the most important, and is the key link for the development and maturity of the 5G industry. Balong5G01 is the first commercial chip released after the 5G standard freeze, marking Huawei's first breakthrough in the commercial bottleneck of 5G terminal chips, making a significant contribution to the development of 5G industry. This also means that Huawei has become the first 5G chips - terminal - network capability and can provide end to end solutions to customers 5G company.
Huawei 5G commercial terminals (CPE) are classified into low-frequency CPE and high-frequency CPE. Huawei 5G low-frequency CPE weighs 2kg and is only 3L in size. It can be placed indoors at will. The measured peak downlink rate can reach 2Gbps, which is 20 times of the peak rate of 100M fiber. It can download an episode of network drama in less than 1 second. In the future, various types of high-definition video and entertainment applications such as VR high-definition online video and VR online games based on 5G networks will bring consumers an extremely enjoyable online entertainment experience, and are compatible with 4G and 5G networks. Huawei 5G high-frequency CPE includes outdoor digital microwave transceivers and indoor interface data units).
According to the 5G standard defined by the ITU (International Telecommunication Union), the 5G network has three characteristics of high speed, wide connection and low delay, which can achieve peak downlink speed of up to 20Gbps, connect 1 million devices per square kilometer and as low as 0.5ms. Delay. This means that communication in the 5G era is not only a connection between people, but it will also expand the connection of people to the Internet, ie Internet of Things. For 2020 and beyond, enhanced mobile broadband (eMBB) and Internet of Things (IoT) applications such as VR/AR applications, industrial Internet, driverless and car networking based on 5G networks will grow with the maturity of 5G networks. It is estimated that by 2025, the number of global connections will reach 100 billion, of which the connection based on materials will account for 90%.
Based on this, Huawei's consumer business also released a terminal strategy for the 5G era, namely: based on 5G high-speed, wide-link, low-latency, respectively, to launch CPE, MobileWiFi and smart phones connected to home and people, 5G industrial module for coupling, 5G car box for connecting car. It is reported that Huawei's first 5G smart phone will be listed in the fourth quarter of 2019.
As a leader in the global 5G industry, Huawei actively assumes the responsibility of industry leaders, overcomes a number of major technical issues, and actively participates in 3GPP standards. As early as 2009, Huawei launched 5G related research, and has invested at least 600 million US dollars in 5G research and innovation. It has established 11 5G research centers around the world (France, USA, Canada, Germany, Russia, Sweden, Chengdu, Shanghai, Beijing, Shenzhen, Hangzhou), more than thousands of experts involved in 5G research. Breakthroughs have been made in various fields such as networking architecture, spectrum usage, air interface technology, prototype implementation and field verification. At present, the peak rate of 5G network measured by Huawei in the 5G experimental network has reached 20.25Gbps, the delay is as low as 0.33ms, and the number of devices that can be connected per square kilometer reaches 2.17 million, which fully meets the requirements of the ITU standard.
It is reported that Huawei has cooperated with more than 30 top operators in China, including China Mobile, China Telecom, China Unicom (600050, Diagnostics), Vodafone, SoftBank, T-Mobile, BT, Telefonica, etc. in 5G. In 2017, Huawei took the lead in launching a 5G pre-commercial network with its partners. In 2018, it will promote the improvement of the industry chain and complete the interoperability test and support the first round of 5G commercial use. Facing the future, Huawei will cooperate with industry partners to promote global unified standards, jointly innovate, promote the process of 5G standardization and industrialization, and build a beautiful era of Internet of Everything.

Steel poles are commonly used to carry several types of electric power lines, distribution lines and lighting system.  Distribution lines carry power from local substations to customers. They generally carry voltages from 4.6 to 33kV for distances up to 30 miles, and include transformers to step the voltage down from the primary voltage to the lower secondary voltage used by the customer. A service drop carries this lower voltage to the customer's premises.